A bike ride from The Devonshire, Grassington | 18½ miles

Grassington is a honeypot. A lovely one, yes, but a honeypot nonetheless. If or when you want to escape the bustle then you can be in a peaceful, hidden corner of the Yorkshire Dales within minutes by bike.

This route takes you to a little known stone circle, a hidden dale that doesn’t even have a name, a time capsule of a village and a magnificent view of Burnsall that you won’t find on the postcards.

Turn right from The Devonshire, Grassington, and, at the T-junction at the bottom of the road, turn right towards Threshfield. At the next T-junction turn right signed to Coniston then soon left signed to Skirethorns.

Pass Bell Busk and Wood Nook caravan park. Eventually pass over a cattle grid and keep going until the end of the lane. Pass through a gap in the wall then turn immediately left onto a bridleway (more of a track) signed to Bordley.

In the centre of the farmstead turn left signed ‘Boss Moor 2’ and through two alminium gates. Pass through a third gate then bear left along the bridleway keeping the drystone wall on your left.

After a sharp bend pass through a fourth gate and, at the top of an incline, through a wooden bridlegate. Keep ahead on the track which becomes a road at Lainger House. Descend all the way to a T-junction.

Turn right then immediately left signed to Rylstone and Skipton. (Alternatively continue ahead to have a look around Hetton). Pass under a railway bridge then, at a pond, turn left and after 50 yards right (easy to miss) signed to Rylstone Church.

Pass the church and, at a farmyard, keep ahead following the signed bridleway to Cracoe through an aluminium gate. Just before the road in Cracoe turn right down a narrow lane which leads round the back of the village.

At an information board about Barden Moor turn left which leads to the road. Turn right and, as the road bears left, turn right (which leads ahead) signed ‘Except for access’ and as Route 688 of the National Cycle Network.

After 2 miles at a T-junction turn right into Thorpe. Bear left at the green and descend to the B6160. Turn right (unsigned) to Burnsall.

In the village as the road bears sharp right keep ahead over the bridge.

Take the first left signed to Hebden then first left again which leads all the way to Hebden. Pass through the village then at the junction with the B6265 turn left back to Grassington (2 miles).

Reward yourself with a pint of Timothy Taylor’s finest ale and a bite to eat at The Devonshire!

The ride in short

Starting from The Devonshire, Grassington, the route heads first to Threshfield and up a winding lane that’s a dead end (unless you’re on a bike) to the lonely farmstead of Bordley.

Then you rattle down the dale that contains Bordley Beck towards a trio of villages, Hetton, Rylstone and Cracoe.

Cycling beneath Hall and Cracoe Fells that loom over the three settlements you pass through lovely little Thorpe en route to Burnsall, over its grand bridge then finally back to Grassington via Hebden.

The 18½-mile route is relatively short but quite strenuous so allow plenty of time. The first leg is along a minor road with some short but steep ascents.

The road becomes a well surfaced track on the approach to Bordley. From that point for half a mile the track is a bit rough and stony and you may need to push briefly once or twice.

After a mile of gravelly track you’re back on tarmac for a rapid and straight descent to Hetton. There is another short off-road section from Rylstone to Cracoe but it’s very smooth and an excellent alternative to the parallel road partly because it gives an open view of the ridge.

The rest of the route is along quiet lanes. A mountain bike is ideal for this ride but not essential. The route is suitable for children aged about 11 and above who are used to off-road cycling.

The Devonshire, Grassington Open daily and food served 11.30am to 9.30pm.

What are the highlights?

The Druid’s Altar. Located close to Bordley, these three standing stones seem to have originally formed a large Bronze Age tomb, perhaps even a chambered cairn. The altar’s situation in the landscape almost in the centre of a circle of outlying hills was evidently of some importance. To find the altar (marked as a ‘cairn’ on the Ordnance Survey map) leave your bike about 50 yards before the cattle grid towards the end of the road to Bordley. Pass through a wooden gate on the left onto open access land and turn immediately right. Walk beside the wall for about 100 yards to the stones.

Bordley. Bordley consists of just two farms and, until recently, was accessible only via a farm track. Ironically, proximity to the old drovers route of Mastiles Lane (now a bridleway) was the reason for the hamlet’s initial development. Monks from Fountains Abbey near Ripon were among the first inhabitants, using the Lane to reach their grazing land on the surrounding fells. In the 16th century over 60 families lived in the valley. Plans in the 1960s to update the Lane to a road linking Malham and Grassington floundered in the face of public opposition leaving Bordley to its splendid isolation. So compact and hidden in a hollow, farmstead today looks like something from a children’s story book.

Fell views. As you descend rapidly from Bordley you have a wonderful view of Wintersett reservoir to your right and the Rystone Cross and Cracoe war memorial perched high on the fells to your left. You get another fine, uninterrupted view of these features on the bridleway from Rylstone to Cracoe.

Thorpe. This unspoilt, seldom visited village looks like an Edwardian photograph come to life. All that’s missing from the scene is perhaps a gaggle of geese, staring residents and a girl in a pinafore playing with a hoop and stick. A walled green with trees and a bench that makes an ideal swig stop is surrounded by the manor house, two ancient barns and an old ‘GR’ post box. Look out for a quirky sign that tells the story of how Thorpe folk stole a maypole from Burnsall.

Burnsall. This village doesn’t quite fit the ‘secret’ theme of the ride but is an essential part of the itinerary nonetheless. The main feature is the bridge built in the 16th century by local benefactor Sir William Craven who made his fortune from drapery in London. The setting of the bridge makes it look like a seaside pier: both are long structures designed to catch the eye that stride out across water and are flanked by flat, open areas popular with visitors. For the secret – and best - view of the bridge, the village and its two churches head for the lane towards Hebden. 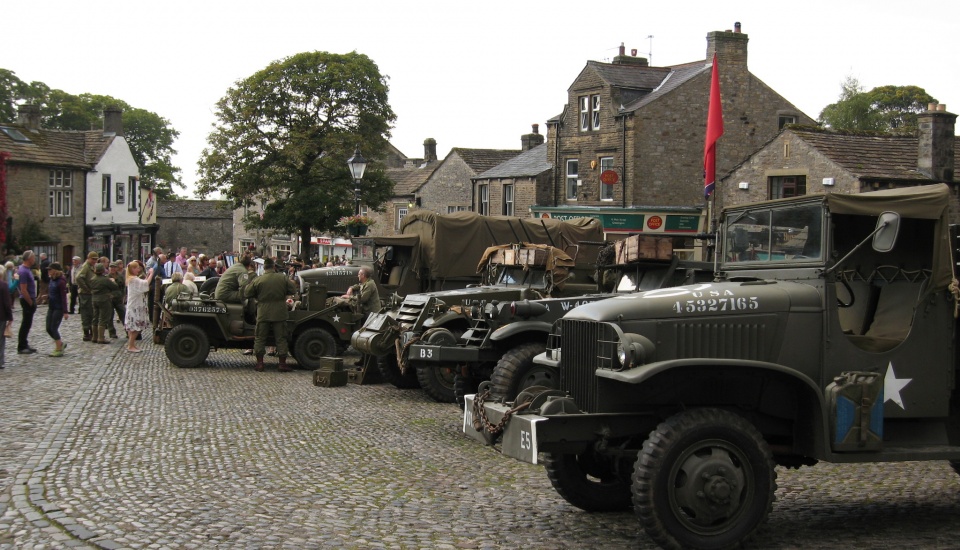 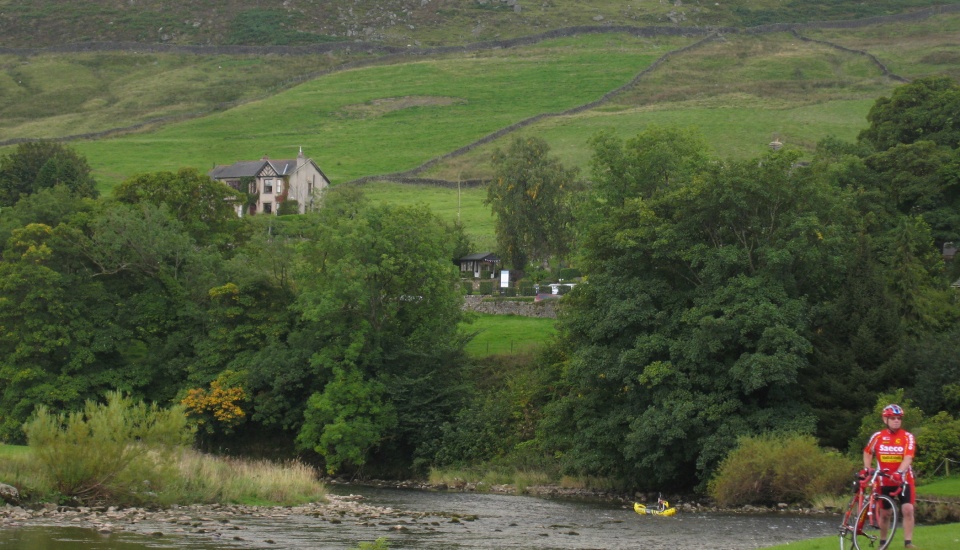 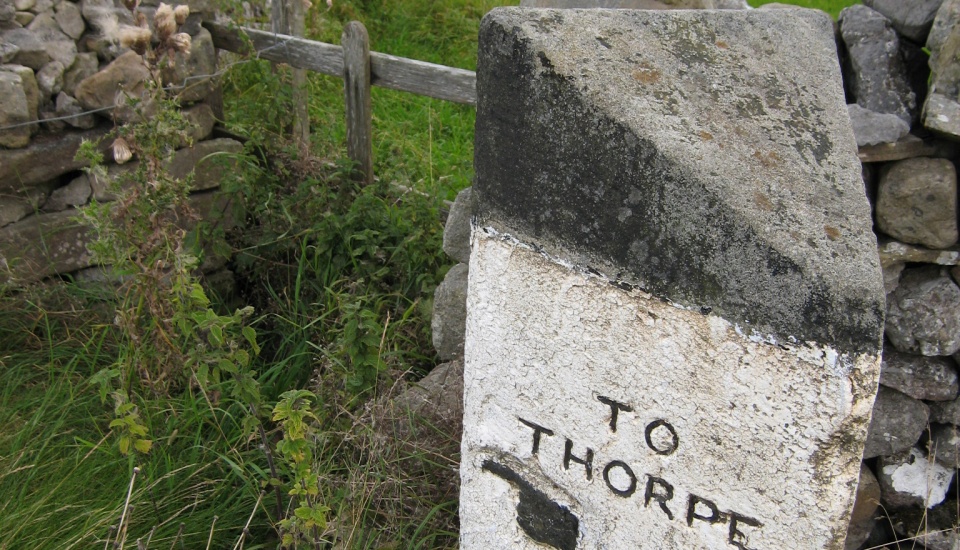