Why does Timothy Taylor’s brewery support the modest changes to Small Brewer’s Relief (SBR) despite not directly benefitting from them?

Small brewer’s relief was introduced in 2002 and there is no doubt it played a significant role in the UK’s ‘craft beer revolution’ leading to more breweries and helping to revitalise the beer category.

However, after over 15 years in operation without a review, it became clear that there were some issues with the scheme as well. There are many points I could make, but below I address the ones specifically related to the recent government announcement (the details of which will not be available until the autumn):

Using a cash value rather than % for SBR

The subsidy to make up for lower economies of scale was substantial at introduction given the exceptionally high UK beer duty rate and a high 50% rate of discount (up to 5,000hl).

For this reason, we support the proposal to set it at a cash level, rather than a % level, so that if the duty escalator were to reappear, due to government revenue needs or health lobby pressure, the amount of subsidy would not automatically rise in lock-step (brewery costs are not, after all, related to government revenue needs or health policy).

A flat rate to 5,000hl and then a cliff edge, discouraging growth (and exports)

The 50% duty subsidy was applicable for every hectolitre up to 5,000 despite economies of scale clearly differing across that volume base. In addition, a cliff edge was created once 5,000hl was crossed that seemed to penalise successful brewers (brewers were stopping at 5,000hl to avoid the cliff edge).

In addition, while the government was trying to encourage beer exports, export volumes counted towards the 5,000hl total, which strikes us as a disincentive.

Therefore, we were keen to see exports excluded from the 5,000hl cap (the government appears not to have acted on this for technical reasons) and the 50% duty subsidy limited to a lower volume (2,100hl) but, importantly, a tapering above that level, and above the 5,000hl cliff edge, to encourage successful brewers to grow.

It is worth noting that our proposed reductions below 5,000hl were hardly draconian. From the current 50% discount we were proposing a range from 47% to 42% across the 2,100hl to 5,000hl volume base (we do not yet know the specifics of government proposals).

The government proposal suggests that this tapering will stop at the current level of 60,000hl, so no brewery not currently within the SBR regime will be eligible. Timothy Taylor’s is outside of the SBR regime and has made it clear in all its submissions that it is not looking for any subsidy; merely to address some of the issues within the existing regime as highlighted above.

Finally, the cliff edge meant that mergers and acquisitions amongst small brewers were very challenging (two 3,000hl brewers merging would immediately place them above the 5,000hl cliff edge at a stroke). Not only will the tapering highlighted above help with this, but we are pleased to see the government has also announced it is willing to consider some transitional relief in these instances.

In conclusion, it is worth saying that all individuals and groups had extensive opportunities to put their perspectives and data to the Treasury during its review; certainly SIBA (of whom we are a member) was extremely active in this regard. The Treasury has now come to its initial broad conclusions which are extremely modest in the context of the overall scheme and, unlike SIBA’s proposal, cost neutral for a government in an (even more) difficult financial position. Further details will be available in the autumn.

In the meantime, I would suggest the industry has a more fundamental issue facing it; the accelerating decline in cask beer sales (see chart below, data pre-COVID-19). 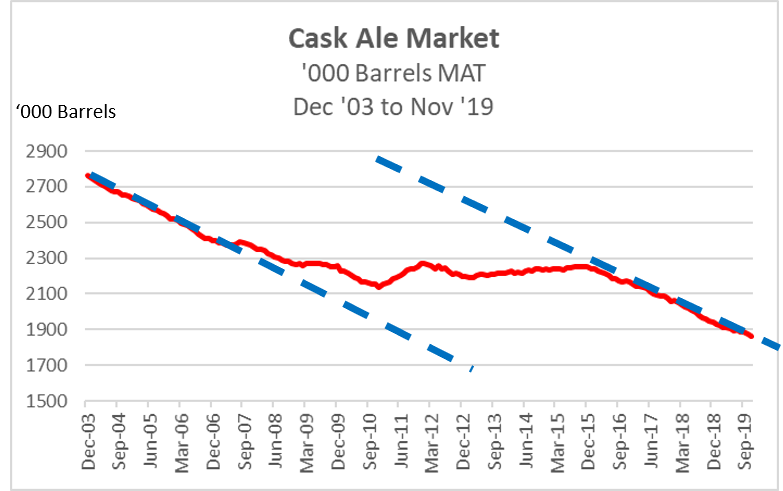