The Rough With the Smooth

Head east from Skipton along a high bridleway to Addingham and Ilkley, explore the many delights of Bolton Abbey, one of Yorkshire’s premier attractions, and then return along peaceful country lanes.

The route can be adapted to suit all abilities and age ranges and also provides an option for abbreviation should the weather deteriorate or you run out of puff!

Family Ride: Use the map of the full loop, heading east in clockwise direction. Turn left from the Woolly Sheep Inn then left again up the High St. At the obelisk roundabout turn right and uphill on the A6131, passing the castle.

Take the first left signed to Embsay. Pass under road and railway bridges and, shortly after the steam railway station, turn right at The Paper Shop down Shires Lane. (From this point the route is signed all the way to Bolton Abbey.)

At a T-junction at the end of the lane turn right and continue ahead to and through Halton East to Bolton Abbey. Return the way you came. Alternatively, you can return via Bolton Abbey station on the Embsay & Bolton Abbey Steam Railway which reduces the cycling distance to 7¾ miles. Trains takes bikes.

To find the station proceed south from Bolton Abbey then turn right onto an old road at the roundabout opposite The Devonshire Arms. Cross the A59 taking care, turn right and then immediately fork left down a short track. At the end turn left to the station.

Mountain Bikers’ Ride: Use the map heading in an anti-clockwise direction, as numbered.

From the Woolly Sheep Inn head eastwards across the roundabout down Newmarket St. Go over a mini-roundabout and continue ahead on the same street which becomes Shortbank Rd after the rail bridge.

Where the road ends continue ahead on a bridleway and steeply up a bank (probably having to push your bike) into some trees, bearing right then left.

At a clearing at the top of the incline turn left into the trees that run along an edge.

You now stay on the bridleway in the same direction for 3 miles. Initially the surface is very stony and uneven.

After a concrete memorial bench the bridleway is gravelled and provides much easier riding.

At a road continue ahead down the signed ‘restricted byway’ which soon becomes a Tarmac road.

Turn right at the end then immediately left onto Skipton Rd and through Addingham. As the village ends turn left signed ‘Parish church’ then immediately right down Ilkley Rd. Turn left on the A65 towards Ilkley.

To abbreviate the route by 4½ miles turn left off the A65 onto Church St. then left down North St. Just after the road bears left look for a footpath (no cycling permitted) on the right which leads steeply down to and over a suspension bridge.

Keep ahead on the footpath to West Hall Farm where it becomes a lane and you can cycle again. Keep ahead, bearing left, to Beamsley then pick up main directions, below.

On the outskirts of Ikley, turn left down Stockeld Rd to cross an old stone bridge over the Wharfe. Turn left then left again down Nesfield Rd signed to the golf club. Stay on this lane all the way through Nesfield and Beamsley.

Turn left at the A59 then immediately fork left to follow a signed cycle path under the main road. Turn left to cross the old Bolton Bridge.

Turn right onto B6160. (For good access to Bolton Abbey without dismounting pass by the pedestrian ‘hole in the wall’ entrance, continue for 100 yards and turn right down a lane signed to the church).

Turn left at Tea on the Green towards, past the Catgill campsite and through Halton East.

On reaching Embsay turn left on Shires Lane. At The Paper Shop turn left down East Lane to pass the steam railway station. Pass under the railway and main road to reach a T junction on the outskirts of Skipton.

Turn right to descend into the town centre passing the castle. Turn left at the obelisk roundabout then right at the end of the High Street to the Woolly Sheep Inn.

Scenic Bolton Abbey takes some beating as a destination for a family day out or bike ride. The abbey is actually the ruins of a 12th century Augustinian priory.

A trip across the famous stepping stones is mandatory even though there is a bridge next to it!

A stroll beside the Wharfe to the Cavendish Pavilion is also recommended but make sure you save some energy for the rest of the ride.

Buy a platform ticket for the Embsay & Bolton Abbey Steam Railway and watch the trains as they come and go.

The railway opened in 1888 and was used to transport stone from the Haw Bank Quarry to Skipton for loading onto barges on the Leeds & Liverpool Canal for the onwards journey. The line closed in 1965 and reopened as a heritage railway in 1997.

Ilkley is one of the most genteel towns in Yorkshire. It’s a sort of “little Harrogate”, in many respects. Overlooked by Ilkley Moor and the Calf and Cow rocks, Ilkley has a traditional ‘town in the country’ feel with lots of open spaces, sports grounds and the River Wharfe adding to its distinctive ambience.

The lane between Ilkley and Beamsley is very popular with local cyclists, this narrow lane winds its way through a wonderfully peaceful and pastoral landscape.

It also passes by a quirky postman’s shelter restored in 2008. The original shelter was built in 1926 to replace an earlier one that provided sanctuary for the postman while delivering mail to Nesfield and Langmar twice daily. Today the shelter is the perfect swig stop with a great view back towards the hills.

You are spoilt for choice for places to eat and drink, most of which are conveniently located about half-way round.

Ilkley is home to a branch of quintessentially English Betty’s café and there are many other eating options of all varieties in the town as well as Addingham which precedes it.

A little further round there are four cafés and an ice cream parlour near to Bolton Abbey as well as an idyllic picnic spot at the stepping stones over the Wharfe looking up at the ruins.

Places to eat at or close to Bolton Abbey:

The route between Skipton and Bolton Abbey mainly follows quiet, flat country lanes that form a stretch of the Yorkshire Dales Cycleway.

The full circuit to Ilkley and Bolton Abbey. 20 or 15½ miles.

The outgoing section of the anti-clockwise circular ride from Skipton to Addingham involves a very steep ascent to an initially uneven bridleway.

Mountain bikers will relish the challenge and the views from the bridleway over the valley are superb throughout but this part of the route isn’t suitable for novices or the less fit.

You can reduce the route a little (see directions) although this does involve pushing your bike briefly. 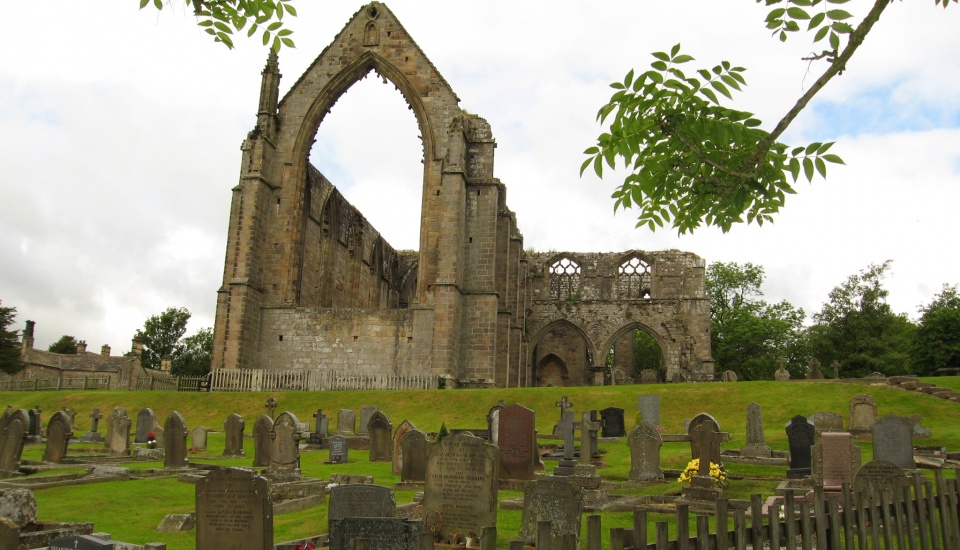 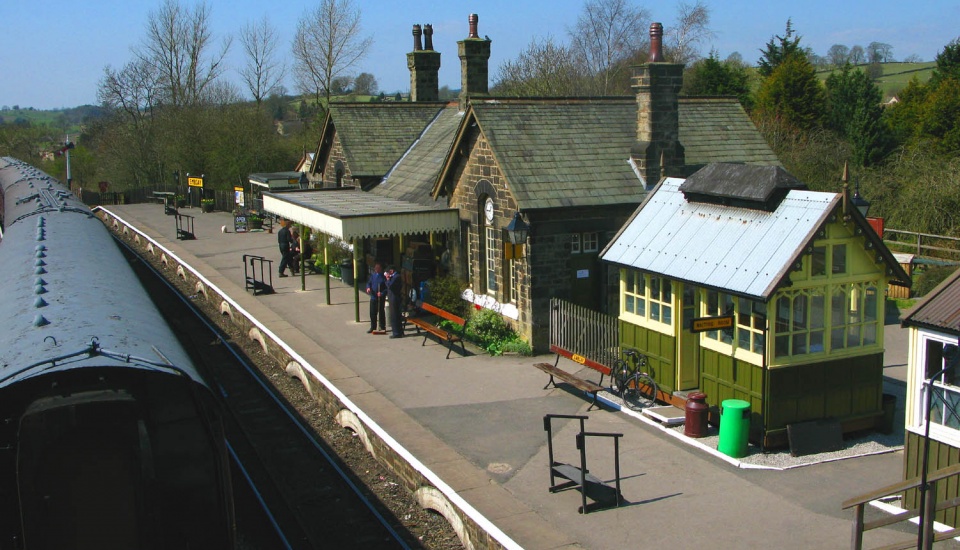 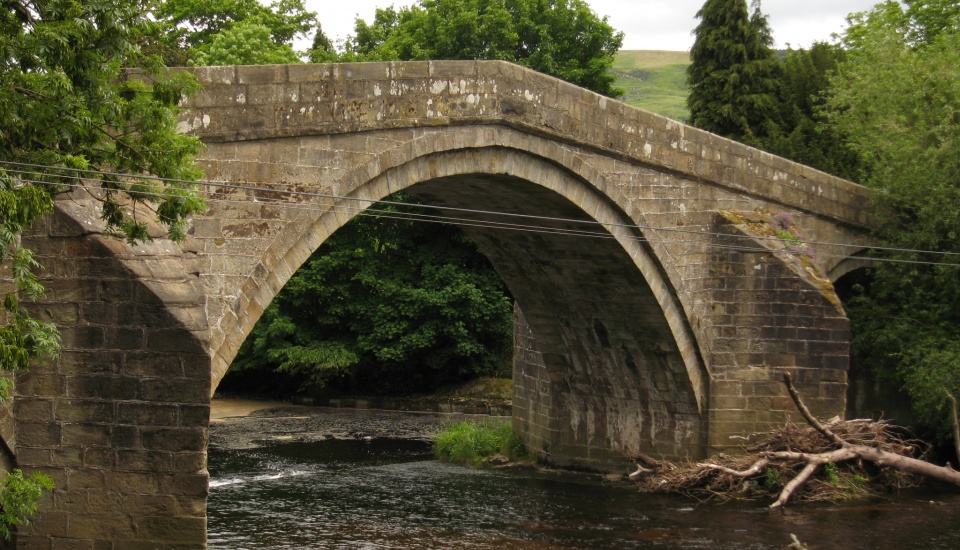